Overview of CD160 and HVEM Pathway

CD160 is a cell surface receptor expressed on NK cells, CD8+ T cells, TCRαβ+ and TCRγδ+ intraepithelial lymphocytes in the intestine, and skin resident CD4+CD8αα+ cytotoxic T cells that stimulate effector function following engagement by its ligands. The identified ligands for CD160 receptors include MHC class I proteins and HVEM. CD160 engagement by HVEM in NK cells promotes co-stimulation of ERK1/2 and AKT activation and production of IFNγ. In contrast, in CD4+T cells, HVEM-mediated activation of CD160 induces inhibitory signaling. Thus, CD160 function may be dependent on its cellular context.

Mechanism of CD160 and HVEM Pathway

The ligation of coinhibitory receptors BTLA and/or CD160 on T cells with HVEM expressed on DC or Tregs transduces negative signals into T cells. These signals are counterbalanced by costimulatory signals delivered after direct engagement of HVEM on T cells by LIGHT expressed on DC or other activated T cells. The predominance of the interaction of HVEM with BTLA and CD160 over the HVEM/LIGHT pathway might be the result of differences in ligand/receptor affinity and the differential expression pattern of these molecules on cell types at different stages of cell differentiation. 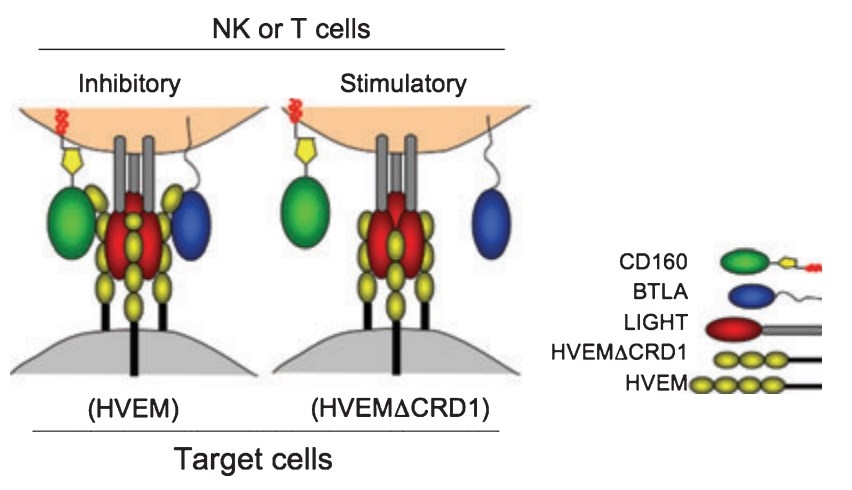 Researches of CD160 and HVEM Pathway

CD160 is expressed on only a small percentage of human CD4+ T cells, and its function on CD4+ T cells has only recently been examined. Studies crosslinking CD160 with high-affinity IgG1 mAbs showed strong immuno-inhibition of CD28 induced T-cell activation. In addition, crosslinking mouse CD160 using anti-mouse CD160 mAb inhibited CD28-induced mouse CD4+ T-cell proliferation. These results are consistent with an inhibitory function for CD160 and HVEM as a negative regulator.

The specific function of CD160 was tested in vivo using a genetic model of CD160-deficiency challenged with B16 melanoma cells. CD160-deficient NK cells showed impaired tumor-induced IFN-γ production and were less efficient in clearing tumors than wild-type cells. IFN-γ has pleiotropic effects in tumors, including inducing expression of HVEM, FAS, ICAM1, PD-L1, and MHC class I and II proteins. Thus, IFN-γ activated by CD160 in NK cells further amplifies CD160 signaling through increased HVEM expression in tumors that may result in increased tumor lysis.

Focusing on the immune checkpoint drug development for years, Creative Biolabs has accumulated extensive experience from practice. With strong foundations and a reliable expert team, we are confident in providing a series of quality-assured services for the CD160 and HVEM pathway, including but not limited to:

If you are interested in our services, please do not hesitate to contact us for more information.