CD200 (cluster of differentiation 200) belongs to the immunoglobulin (IgG) superfamily expressed in a wide battery of cell types, such as T cells, B cells, dendritic cells, as well as endothelial cells. Moreover, pilot studies have shown that CD200 has also been identified in several tissues and organs, including nervous, skins, and tumor-associated cells. Typically, CD200 is a protein with a size of approximately 45 kDa and consists of a transmembrane domain, a cytoplasmic domain, and two IgG regions. Up to now, it has been regarded as a main inhibitory ligand that plays an important role in mediating immune responses against various pathogens.

Also, CD200 can bind to its receptor CD200R, found in macrophages, regulator T cells, and natural killer cells (NKs). The CD200R family is composed of four subtypes, CD200R1, CD200R2, CD200R3, and CD200R4. In general, CD200R3 and CD200R4 can only be found in mice. They share a similar structure with CD200 but have a different cell signaling region. Recent reports have revealed that CD200 interacts with CD200R1 through the Ig V-type domain to trigger the activation of the suppression signals of immune responses. 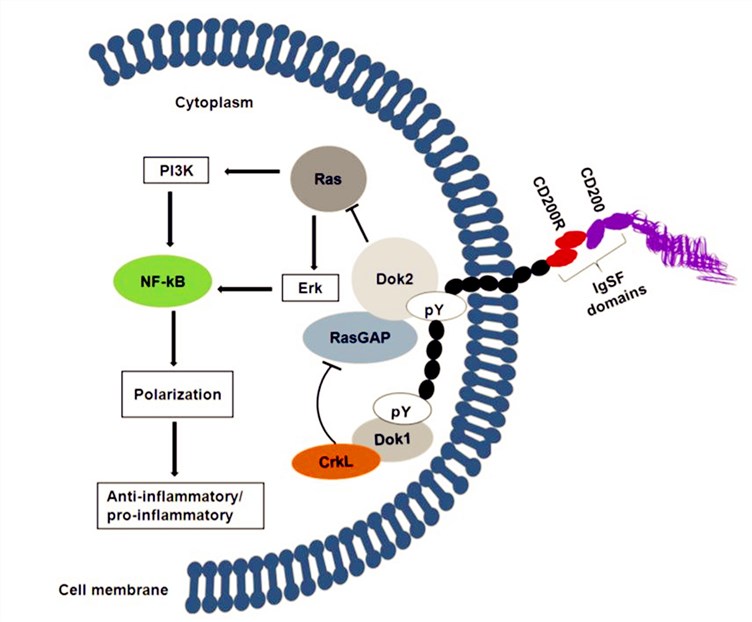 CD200R/CD200 signaling pathway is involved with many immune cells, such as T cells, B cells, and monocytes. CD200R can activate Dok2, and RasGAP/p120 to inhibit the expression of mitogen-activated protein kinases (MAPK), prevent the activation of Ras protein, as well as suppress the bioactivity of PI3K and Erk. Furthermore, the binding and interaction between CD200 and CD200R can lead to a signaling cascade for SHIP and RasGAP recruitment. Dok1 can regulate the activity of Dok2, and its activation is through binding to specific phosphotyrosine residue of CD200R cytoplasmic domain. Besides, a series of anti-inflammatory signals can be triggered to cause the inhibition of NF-kB. The combination of Dok1 and CrkL can also block the activation of RasGAP but lead to activation of NF-kB and many kinds of pro-inflammatory phenotypes.

As a result, a wide variety of novel drugs that target CD200/CD200R signaling pathways, like antibodies and small-molecule drugs, have been developed and evaluated in both large-scale clinical trials and pre-clinical trials. To meet the challenging requirements, Creative Biolabs has built a team of experienced scientists with facilities and processes designed specifically to provide the best drug discovery, and the strategy and protocols can be customized to suit any immune checkpoint molecule project. Please feel free to contact us for more detailed information.