Overview of CD96 and CD155 Pathway

The interaction of CD96 and CD155 mediates cell-cell adhesion, as defined in cells engineered to express CD96, in an NK-cell line, and both CD4+ and CD8+ T cells. An anti-CD96 mAb that blocks CD155 could reduce trans-endothelial migration but not chemokine-mediated transmigration. 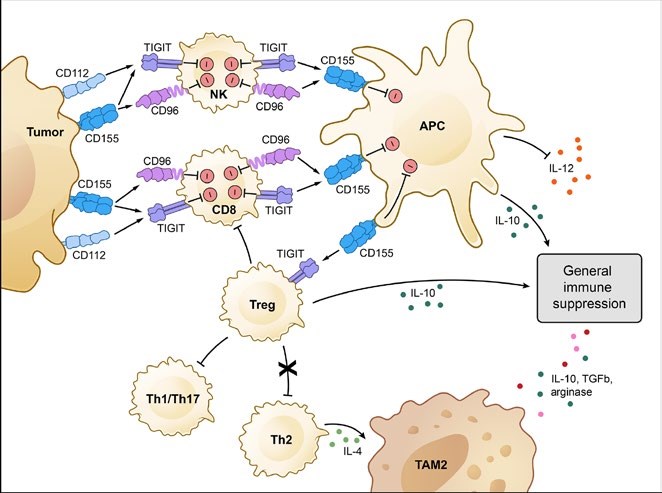 Researches of CD96 and CD155 Pathway

In the experimental lung metastasis model using CD155 expressing melanoma cells, Cd96-/-mice were shown to have significantly fewer lung metastases while there were no differences in metastatic lung burden in Tigit-/-mice. An NK cell-intrinsic function for CD96 in clearing lung metastases was demonstrated using reconstitution of wildtype or Cd96-/- NK cells or NK-cell depletion experiments in Cd96-/-mice.

In the methylcholanthrene (MCA)-induced fibrosarcoma model, tumor resistance was observed in either Cd96-/-mice or wild-type mice treated with an anti-CD96 mAb. Loss of CD96 did not affect NK cell-mediated cytotoxicity but did increase IFN-γ production. Accordingly, in each of the above tumor models, neutralization of IFN-γ abrogated the protective effect observed in Cd96-/-mice, suggesting that CD155-mediated inhibition of CD96 limits the production of IFN-γ, thereby attenuating NK cell-mediated immune surveillance.

Analysis of Cd96-/-mice in a series of experimental lung metastasis models, including melanoma, lung carcinoma, and prostate carcinoma, demonstrates a consistent inhibitory role for CD96 across each of these models. Moreover, an anti-CD96 mAb known to block CD155 results in the control of lung metastases dependent on NK cells and IFN-γ. Consistent with a CD155-blocking activity of the mAbs, the reduced lung metastasis observed with anti-CD96 was not dependent on FcR expression.

Creative Biolabs is a professional service provider of immune checkpoint drug development who focuses on this field for more than ten years. We are experienced in providing a series of customer services for the CD96 and CD155 pathway, including but not limited to: